The main research interest at the department lies in the reconstruction of 3D information from images, investigated in projects of archaeological applications. The main goal is to find an automated acquisition method to replace the tiresome task of photographing, measuring and cataloguing of archeological pottery which up to now has been carried out by hand.

The binary image is now the input for a labeling procedure which assigns the pixels of each detected square with a different number. The labeled image is shown below in the left picture. This labeled image and the intensity image are the input for a procedure which finds the corners of the squares. The labeled image is used to compute start values for the coordinates of the corner points. The intensity image is necessary to compute the corner points in subpixel accuracy. The right picture depicts the image with the detected calibration (corner) points. From these calibration points the corresponding world coordinates are computed.

The search for the correct match of a point is called the correspondence problem and is one of the central and most difficult parts of the stereo problem. Several algorithms were published to compute the disparity between images like the correlation method, the correspondence method, or the phase difference method. If a single point can be located in both stereo images then, given that the relative orientation between the cameras is known, the three dimensional world coordinates may be computed. For a given pair of stereo images and the known orientation parameters of the cameras, the corresponding points are supposed to be on the epipolar lines. Since a parallel camera alignment is used in this project the epipolar lines are the scanlines in both images.

The following equation is used for the matching algorithm:

In order to get a dense disparity map and to increase efficiency of the algorithm, 5×5/4 gaussian image pyramids are used to solve the correspondence problem in a hierarchical manner 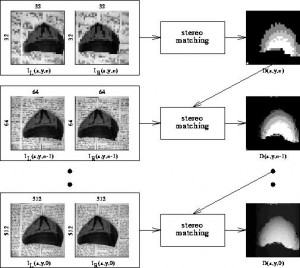 Shape from structured light is based on active triangulation. A very simple technique to achieve depth information with the help of structured light is to scan a scene with a laser plane and to detect the location of the reflected stripe. The depth information can be computed out of the distortion along the detected profile. In order to get dense range information the laser plane has to be moved in the scene. Another technique projects multiple stripes at once onto the scene. In order to distinguish between stripes they are coded (Coded Light Approach) either with different brightness or different colors. In our acquisition system the stripe patterns are generated by a computer controlled transparent Liquid Crystal Display (LCD 640) projector. The light patterns allow the distinction of 2^n projection directions. Each direction can be described uniquely by a n-bit code, which can be seen in Figure (b).

In Figure (a) the intensity image of the test fragment is depicted. This image and one image without illumination is taken prior to the range image computation to determine the maximum and the minimum intensity for each pixel of the fragment. The camera with the optical center O_c is placed at a certain angle to the projector having the optical center at O_p. The camera grabs gray level images I(x,y,t) of the distorted light patterns at different times t, which can be seen in the subsequent figure.