Recently, automated visual surveillance systems to observe certain areas are becoming more important in the research field of computer vision. Conventional surveillance systems are already installed in many areas ranging from traffic surveillance to security relevant scenarios.
However, these systems present limitations making them unsuitable in many situations. On the one hand, the systems archive huge volumes of video for eventual offline human inspection. On the other hand, security areas have to be monitored by human operators, located in a control room containing a bank of screens streaming live video from each camera, in order for the system to be effective.
CVL’s contribution to visual surveillance is in the area of image sequence analysis focusing on the topics motion detection, object tracking and scene understanding:

Motion detection algorithms are the basis for a wide range of applications in computer vision like visual surveillance, object recognition and tracking and compression of video streams.

Object tracking can be described as a correspondence problem, and involves fnding which
object in a video frame relates to which object in the next frame. Tracking methods can be
classified into four major categories: 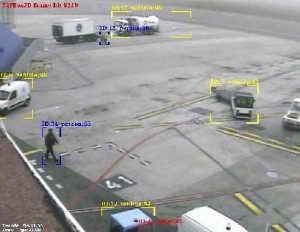 The aim of a “Scene Analysis” algorithm is to recognise activities in scene. Our recognition algorithms are mainly based on statistical analysis of the scene. Rule based approaches are applied to identify e.g. abnormal behaviour. 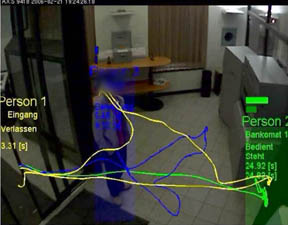 The system indicates the behaviour of the person