The Institute of Applied Physics is interested in the development of advanced optical microscopy methods and their application to biological questions, regularly in close collaboration with biologists. They use novel single-molecules localization microscopy techniques such as photoactivation localization microscopy (PALM) (1) or stochastic optical reconstruction microscopy (STORM) (2), which allow for improving the resolution of fluorescence microscopy to a few tens of nanometers. Due to the novelty of the methods, there is substantial need for improvement on the level of data analysis. Specifically we are interested in the behaviour of single proteins and lipids in cell membranes. By observing and tracking these molecules we can, as an example, gather information about their stoichiometry, diffusional behaviour, or interaction kinetics.

In the projects, single molecule fluorescence data shall be simulated on the computer and analysed with different existing methods. The effects of background noise, dye emission parameters, and detector settings shall be quantified and the various methods shall be compared.

The following projects are offered:

Figure 1. Localization Errors (LE) can be substantially smaller than the full width at half maximum (FWHM) of the signal of a single molecule. For light microscopy with FWHM ~300nm, localization errors of just a few nanometers can be obtained.

Figure 2. Single molecule tracking. The thermal motion of particles can be exploited to report on matrix properties, for example the structure of biomembranes. Ideally, the density of labelled probes is low enough so that single molecule trajectories can be reconstructed unambiguously. After determining the coordinates of all molecules in the frame recorded at time t, one would like to correlate the consecutive images and track the individual molecules over time. 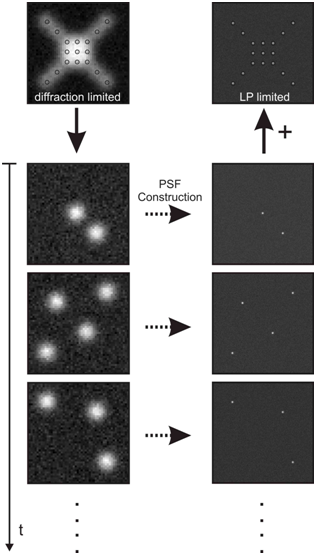 Figure 3. Superresolution single molecule microscopy. The idea is to stochastically switch fluorophores on and off, so that only a marginal portion of the fluorescent labels are converted into their active state; their positions are then determined to accuracy much below the diffraction limit. By repeatedly activating and deactivating all fluorophores in the sample, a collection of all single molecule positions can be obtained, which is equivalent to a superresolution fluorescence image. The simulated images on the left side show diffraction-limited microscopy data, on the right side we plotted the obtained superresolution images. The positions of all dye molecules are indicated as circles. Ideally, after each image all fluorophores are photobleached or switched to a dark state, and new fluorophores get activated (we show here three exemplary images). For each molecule, the signal distribution can be fitted with the point spread function. As a result, one may indicate the obtained position as a Gaussian with a width given by the localization precision. A sum of all Gaussians gives the total superresolution image.